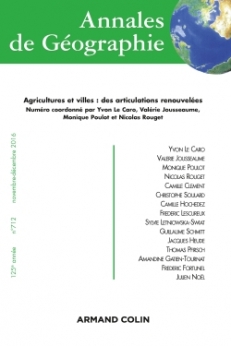 The paper aims to show how farmers deal with urbanization at the farm scale. On the one hand, agriculture, farmed landscapes and the farmers are an essential part of the countryside, the basis for defining it and core of its social representations. On the other hand, under the urban-industrial hypothesis, following a period of modernization agriculture is now being challenged by urbanization. This is happening in a triple process: urban sprawl, not only in peri-urban areas but also in the villages; diversification of rural population (back-to-the-land movement); and diffusion of the urban models and values, even in farmers’ own minds. The question is therefore to find how urban influences are at work in places that, whether nearby or far away from cities, remain country landscapes. Agriculture is taking onmore andmore functions considered as urban because they were initiated by urban dwellers’ needs or aspirations, before being recognised as legitimate by the whole society. In some cases, opportunities opened up by urban desires are explicitly marketed by farm businesses as diversification projects, but the mainstream is made of rural-urban spatial designs that can be understood as agricultural or urban externalities. The former are produced by farmers (hedgerow landscapes, drinkable water, etc.), the second are tolerated or accepted as inclusions in the farmed countryside’s framework (windmills, hamlet dwellings, highways, etc.). Thirteen farmers (men and women) were surveyed in three local areas in Brittany, Normandy and Poitou-Charentes, by means of “wellington boot interviews”, over the farm landscapes. Spatial features of urbanity are numerous, diffuse and generally well integrated in the landscapes and farm systems surveyed. For these features the paper proposes a classification, a map made on a single farm and therefore a topological analysis of their inclusion in the spatial system of the farm, stressing the potential of geographical analysis for understanding agri-urban interactions at local scale. Most of the farmers questioned give evidence of their skilfulness in making their farm ready for inclusion of exogenous trends that have or will have a direct impact on the place where they work: that is how they generate a new countryside, hybridized with urbanity, which anyone can find at least partly familiar.