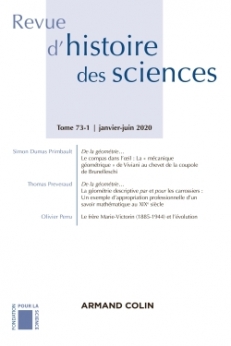 During the 17th century, being an engineer at the Medici Court was a discipline at the intersection of mathematics, and the pictorial and mechanical arts. Born out of the heritage of Alberti, Vinci, and Vasari, the Accademia del disegno – founded on the three Vasarian pillars of linear perspective, chiaroscuro, and Euclidean geometry – was thus specifically created to teach drawing as the core practice for Tuscan engineers, architects, and mathematicians, as well as painters, decorators, and scenographers. At the beginning of the 17th century, it encouraged a synthesis between mathematics, art, and engineering through the concept and practice of disegno. After Galileo’s death in 1642, his last disciple Vincenzio Viviani (1622-1703) became court engineer, charged with surveying the Valdarno as well as the many architectural constructions of Tuscany so as to produce expert reports intended for the Tuscan engineering corps. In his plentiful field notes Viviani left numerous drawings and sketches in sanguine, ink, and pencil ; from life and from memory. I propose to delve into this personal archive composed of landscapes and genre scenes, as well as technical schemata, and to conceive of it as a place of knowledge by focusing on its materiality, revealing savant and artistic practices : the meticulous observation of nature, the extraction of the relevant forms, and their translation into a graphic language that allows for the emergence of knowledge. In the context of a court culture that does not draw any distinction between painter, engineer, and mathematician, the disegno appears to be the core skill of a practical epistemology rooted in a visual culture that blurs the modern boundary between artist and savant. Paying specific attention to the geometrical schemata Viviani produced at the end of the century to study the mechanics of Brunelleschi’s cupola in Florence, this paper aims at investigating the practical epistemology of disegno as a specific form of mathematizing nature as opposed, in the practice of early-modern nascent physicomathematics, to more symbolic forms. Revealing the tensions between the engineer and the physico-mathematician, this « geometrical mechanics » foreshadows the limits of disegno.