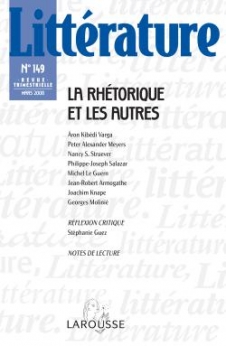 Critics have hardly bothered with the fact La Recherche contains a real anecdotal fiefdom within its work. Anecdotes are generally held to be secondary elements, seemingly insignificant. Yet, it appears that anecdotes, specifically regarding the anecdotage of biographical material, are critical to the makeup and to the interpretation of the Proustian character. From the romance characters, the narrator didn’t give us any biographical or psychological explanation, only a series of anecdotes from which emerges a kind of portrait in the tradition of the ana, those collections of remarks and anecdotes so appreciated under the Ancien Régime. This method, that we called “la mise en ana”, turned out to be a dominant instrument when applied to serve the theories that are the foundations of the Proustian literary endeavour; theories, such as these, have long been acknowledged as dealing mostly with the denial of psychological determinism and the resolve never to allow any of his characters to be entrapped into, or hardened by, a “sole” non-conflicting identity, as well as the baring of all hierarchical structure amongst characters, or even in the representation of a persona through the folds of Time. Thus, anecdotal elements need not undergo the narrative’s supremacy, as it was customary with Proust’s predecessors. Rather, they are free to the extent to which anecdotes themselves, help the characters “reclaim” their own freedom. Such a diluted and fragmented approach in the production of literature poses  oncern, notably when it comes to reading. The treatment of anecdotes in this context seems, nonetheless, as paradoxical as it may possibly be, clutching also to the very purpose of bolstering the protagonist’s different appearances, in order to offer the reader comprehensible appraisal and effortless memorization of the character. While fictional and historical, likewise, as well as aesthetic tradition turned anecdota into a memorization device, Proust implemented it as the text’s “intrinsic memory” (mémoire en texte). Hence, Proust’s handling of the anecdote becomes a multifunctional system, a sort of hearth in which perceptions either converge towards or depart from their natural host.